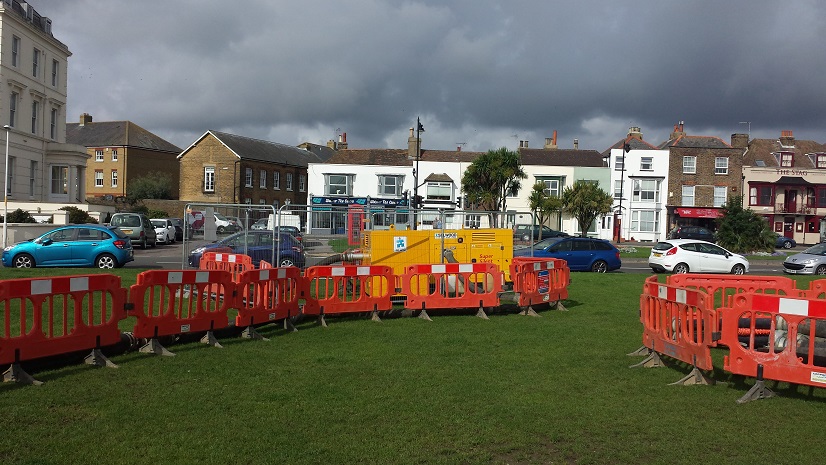 Selwood’s pump rental specialists stepped in to quieten things down when a complex operation to repair a collapsed sewer attracted noise complaints from neighbours.

Engineers working for Anglian Water had to dig seven metres down to reach a collapsed section of sewer in a busy residential area in Chelmsford, Essex.

The job was huge - the collapse had caused a 60-cubic-metre sinkhole under the road which needed to be stabilised.

Equipment had been installed by a contractor on a nearby roundabout to carry out overpumping, because of the need to keep the sewer chamber dry while the repairs were carried out.

However, neighbours began to complain about the noise from the pumps, which needed to operate round the clock.

Anglian Water’s site agent called Selwood Key Account Manager John Kitchen in to check the setup, explaining that there had also been problems with the existing supplier including equipment breakdowns and difficulties with getting engineers on site.

A survey of the site by Selwood’s experts revealed several problems, including a missing door on one of the acoustic cabinets that should have completely enclosed the pump inside to minimise noise.

The Selwood team were able to draw upon the company’s extensive stock and transport capabilities to act immediately.

The next day, three Selwood S150 super silent pumps, complete with telemetry and attached to fuel cubes, had been installed on the site.

The result was that the public concern was eased and Anglian Water could concentrate on the sewer repair while keeping disruption to local people to a minimum.

“Selwood’s intervention meant that we were quickly able to resolve the problems that had been highlighted, ensuring that the job could continue with the least possible disruption to the local community.”