Everything you need to know about water pump engine changes

When people in the pump sales and pump supplier industry talk about pumps, you’ll often hear them refer to engines using the terms “Tiers” and “Stages”.

Both these terms relate to emissions standards – the regulations which set the maximum amount of pollutants an engine is allowed to emit to comply with legal limits.

Because there are different terms in use, it can get confusing. Here’s what you need to know.

What’s the difference between Tiers and Stages?

Put simply, they mean broadly the same thing – but in different parts of the world. They all refer to legislation as it applies to engines for non-road mobile machinery (NRMM) – essentially, any equipment, such as a Selwood Drainer pump or ‘S’ Solids Handling pumps solids handling pump, that has an engine but isn’t a vehicle.

Stage is a term used within the EU (including the UK) – where we refer to a Stage IV engine for example. In these areas, emissions regulations are imposed by the European Union and the UK Government.

Tier is the term used in the US and Canada, which are certified by the United States Environmental Protection Agency (US EPA). This is where we may, for example, refer to a Tier 4 engine.

What about other areas?

Territories other than the US and Canada and the UK and Europe will refer to one or both certification schemes. Engines can be dual certified, or be certified to one regulation or other. These territories have their own guidelines and timelines for meeting older stages or Tiers. Some remain unregulated. China has created its own standard, called China Stage (number).

Do Tiers and Stages match up – is a Tier 4 engine equivalent to a Stage IV engine?

No – that would be too simple! The Tier and Stage classifications have different criteria, such as power bands, which do not directly compare.

It’s always a case of looking at which system applies in the country you want to use the pump in, and then making sure it is rated using the right one.

Which system is the strictest?

At the moment, the EU’s Stage V emission limits are the toughest of the two, requiring engines to produce lower particulate emissions than Tier 4 Final. This is achieved by the use of diesel particulate filters in the exhaust after treatment.

Enforcement of transition deadlines was due to come into force in 2020 but was delayed due to the pandemic. Now, it is planned that beyond December 31st, 2021, only engines which meet Stage V criteria can be sold in the EU.

You can see the comparison between the emissions standards here: 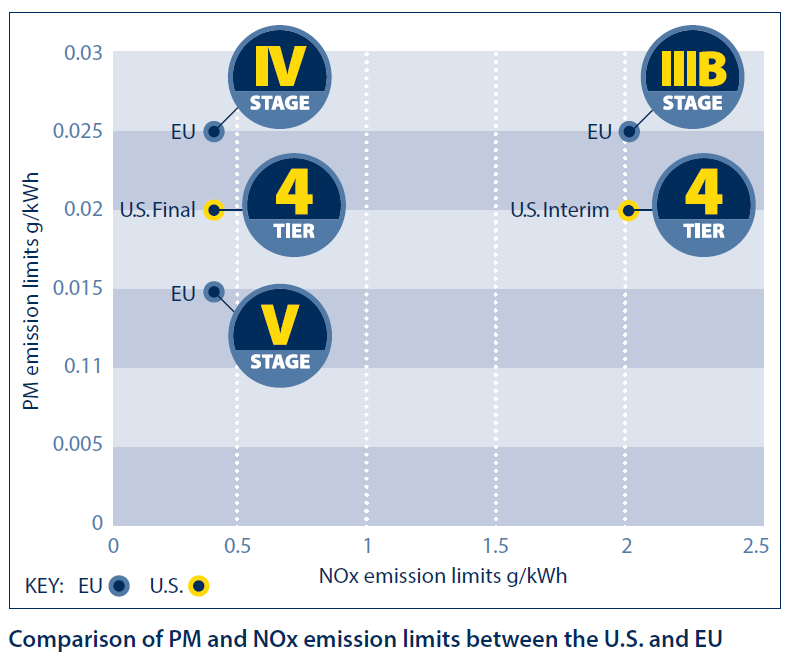 Some customers will already need pumps that meet the more stringent standards.

For example, we are pleased to be contributing pumping support for HS2, the UK’s biggest and most ambitious infrastructure project, which has raised the bar on emissions standards. Parts of the project effectively require compliance with Stage V standards this year.

There are also designated Lower Emissions Zones (LEZs) around the UK, which also require NRMM to meet higher standards.

The organisation Cleaner Construction for London, supported by the Mayor of London, has set out a timeline for reducing NRMM emissions in the capital. As of September 2020, equipment on all sites within London’s Central Activity Zone and in designated “Opportunity Areas” are required to meet stage IV as a minimum. It is anticipated that by 2030, Stage V will be the minimum requirement across Greater London.

At Selwood, we are already manufacturing and supplying pumps including drainer pumps and solids handling pumps which meet Stage V standards and can readily provide these to customers who need them.

Which engines are used by Selwood?

Stage IIIB transition engines for use in the UK and EU. These pumps remain legal for their natural life if they were manufactured by June 2021 and put into operation or sold before December 31st, 2021.

Stage IV compliant engines for use in the UK and EU-regulated areas.

Tier 4 compliant engines for sale and use in the US or markets not regulated by the EU.

Stage V engines which comply with the new EU legislation.

Selwood has become the first UK pump rental company to offer pumps that can be fuelled by Hydrotreated Vegetable Oil (HVO).

All Selwood pumps which have a Stage IIIB engine – including the Eco range of units – S160Eco, D150Eco and HSP35Eco – can now be run on the HVO fuel as an alternative to diesel.

HVO is a second-generation, clean-burning fossil-free biofuel which is made from renewable, sustainable raw materials and can reduce greenhouse gas emissions by up to 90%. It also significantly reduces nitrogen oxide (NOx) and particulate matter (PM) emissions.

The fuel is completely interchangeable with diesel, without the need to clean out the pump’s fuel tanks or make adaptations, and with no negative effect on pump performance.

The December 2021 deadline is looming, so time is running out to order pumps which use transition engines! Speak to our Pump Sales team today.