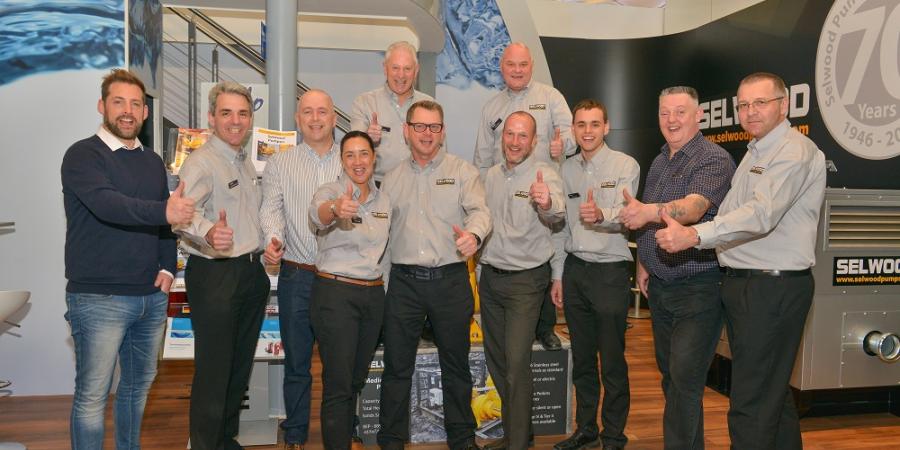 Selwood’s pump sales teams have returned from a successful trip to Munich where they exhibited at Bauma, the world’s largest trade fair.

During the exhibition, which was attended by more than half a million visitors over the week, Selwood’s representatives took the opportunity to catch up with suppliers, distributors and fellow industry professionals.

The event became a celebration for both companies as Selwood is celebrating its 70th anniversary in 2016 while SPT marks 40 years in business.

To mark the milestone, Selwood took along a platinum-wrapped D100 Super Silent Drainer pump which attracted the attention of passers-by.

In the spirit of celebration, SPT representatives pulled pints of traditional German beer while Selwood staff served up pints of Romsey Gold, brewed close to the company’s Hampshire Head Office.

Selwood also used the opportunity to announce the arrival of the S150M, a new medium head solids handling pump which is the latest addition to its extensive range.

Selwood’s team was led by CEO Chris Garrett, who said: “Bauma is one of the highlights of the industry calendar and we were delighted to be able to meet up with our extensive network of international contacts, and make some new ones.

“We took a different approach with our stand this year to celebrate our anniversary and our close relationship with our friends at SPT – and we were delighted at the reaction.

“It has already been a great year for us with the launch of our new website, the new S150M product and our 70th anniversary celebrations. These all helped to generate a real buzz around our activity in Munich and we are looking forward to enjoying a similar experience at other trade shows later this year.”

Selwood will return to Munich to exhibit at the IFAT Water, Sewage and Waste Management show from May 30 to June 3. The company will also have a presence at Hillhead 2016 in Buxton, UK, from June 28 to 30.