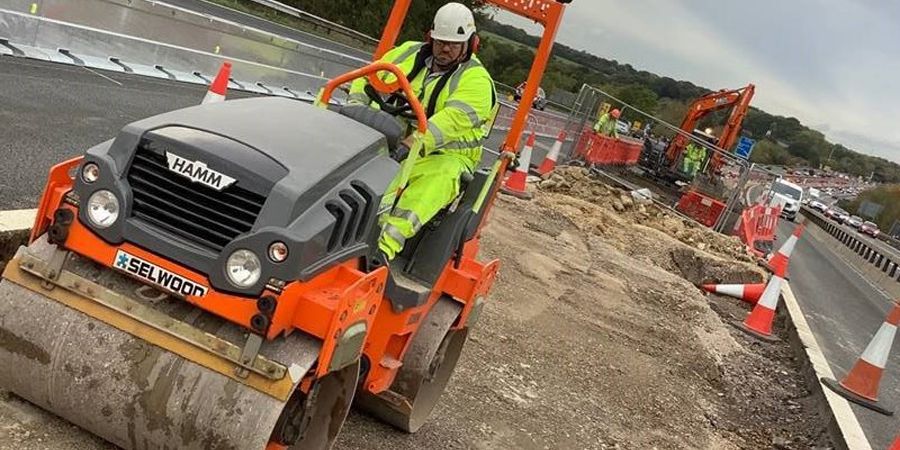 Thousands of commuters use the M27 between Portsmouth and Southampton each day, and most will have experienced the congestion the route regularly suffers during peak hours.

Selwood’s pump rental and plant hire teams are proud to be involved in a major Highways England project that aims to ease this problem by upgrading the route to become a smart motorway.

The works, which many commuters will be aware of because of temporary 50mph speed limits currently along the route, involve turning the hard shoulder into a running lane to increase the capacity of the motorway to four lanes.

Once the scheme is completed, this extra lane will be complemented by active traffic management technology to help ease congestion through the use of variable speed limits at busy times.

Selwood is involved in the project as a supplier of pumps and rollers to R&W, which is working along a 15-mile stretch of the route to harden the central reserve and install a reinforced barrier to improve safety. R&W is sub-contracted to Bam Nuttall – Morgan Sindall Joint Venture (BMJV), the principal contractor to the Highways Agency for the scheme.

The equipment is supplied from Selwood’s pump rental and plant hire teams at our headquarters at Chandler’s Ford, close to the site of the works.

Selwood, are “very proud to support R&W on their part of this major project. We have a close relationship with R&W built over five years of working together, and during that time we have seen their business grow significantly.

“They share Selwood’s core values of safety, respect, integrity and pride in delivering a first class service to their customers. We very much look forward to working with R&W on future projects.”