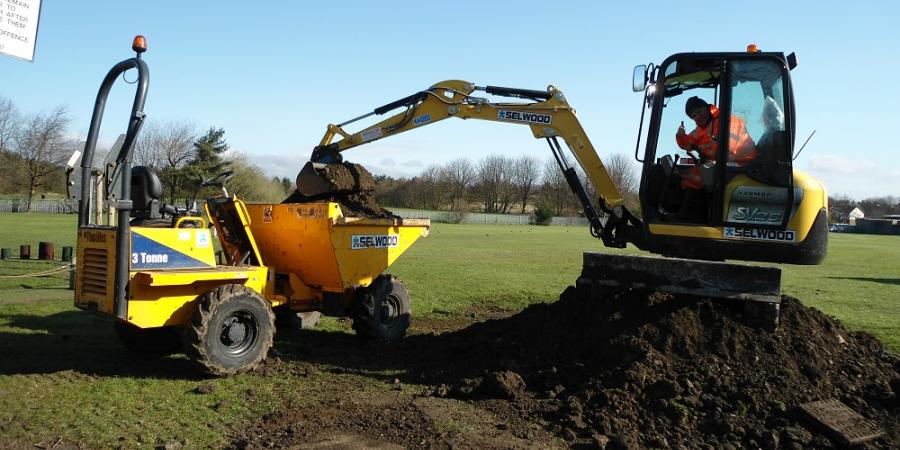 Volunteers from plant hire specialists Selwood donated time and equipment to help create a unique “forest garden” for use by children at a junior school.

Staff from Selwood’s Newcastle branch swung into action to help move 60 tonnes of topsoil that had been supplied to Usworth Colliery Primary School.

The soil had been handed over by construction specialists Owen Pugh Group, who are regular customers of Selwood’s Newcastle branch, in response to a plea from Year 4 pupils.

As part of a literacy project, the children had written to several local companies to ask for help in creating the garden.

Gary Wright, headteacher at the school, showed the Selwood volunteers the proposed area for the newly-designed area, on a part of the school field with dozens of trees.

The children asked for the topsoil to be formed into two snake-like shapes that could be planted with grass seed to make a forest play area.

While the children were on holiday, Selwood’s teams used a three-tonne mini digger and a dumper, operated by Newcastle-based Selwood sales representative Andy Varley, to create the shapes.

All the equipment and time for the project was donated by Selwood at no charge as part of the company’s programme of community activity to mark the 70th anniversary of its founding.

Andy said: “This was a really inspiring project and we were only too happy to help. Designing and organising the creation of the garden was an incredible feat, especially considering the young age of the pupils involved.

“We are delighted to have played a small part in creating this green area which will be enjoyed by children at Usworth Colliery Primary School for many years to come.”