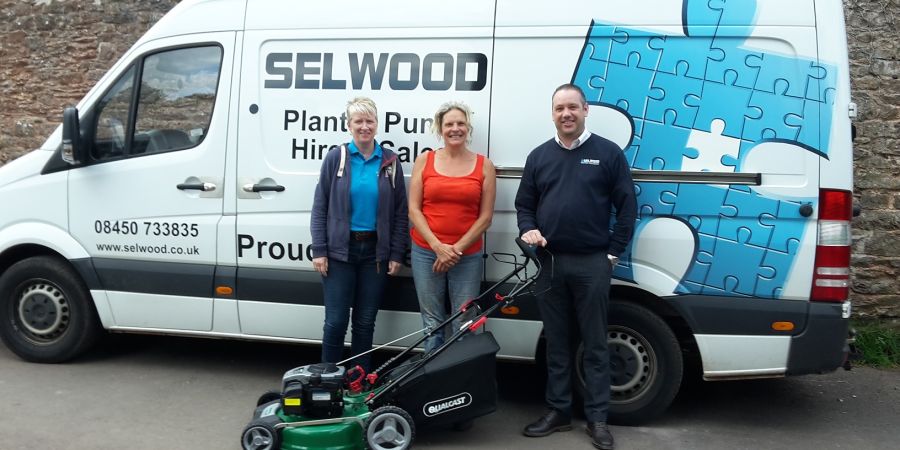 Selwood’s Exeter plant hire specialists went to the rescue after a cry for help went up from volunteers at a dog rehabilitation and rehoming centre.

Devon Dog Behaviour Rehab and Rehome put out an appeal after its lawnmower, which was regularly used to maintain two large exercise areas, broke down. The mower was old and parts to repair it could no longer be found.

The plea was passed on to Selwood by Carolyn Inness of Paignton-based Aish Project Management, who is a supporter of the centre and helps to foster dogs.

Aish is a regular customer of Selwood plant hire, and when news of the centre’s plight reached the ears of Selwood’s Exeter branch manager Terry Clark, he decided to help.

Selwood bought a brand new petrol-powered Qualcast mower and handed it over to the dog centre.

Terry said: “Aish Project Management is a long-standing and valued customer of Selwood, so we’ve got to know them very well. I knew that Devon Dog Behaviour Rehab and Rehome is a cause very close to Carolyn’s heart, so when she made the appeal for help, we wanted to do something positive for them.

“It’s a little gesture but I’m glad it’s made such a different to the centre and to the fantastic work it does.”

Carolyn said: “We have such a good relationship with Selwood – it’s all about the service with them. I foster dogs on behalf of the centre and it relies on donations and volunteers, so we were very grateful for Selwood’s generosity.”

Devon Dog Behaviour Rehab and Rehome, in Combe Fishacre, near Newton Abbott, is run by professional dog behaviourist Ruth Owen. The centre rehabilitates and rehomes dogs that may otherwise be put to sleep.

The centre’s philosophy is that no dog should be destroyed unless it is dangerous. Some dogs live with Ruth at the centre, while others are fostered out to volunteers like Carolyn.

Ruth said: “Our two exercise areas are vital in making sure that the dogs we look after are as active as possible. Both of those areas are on a hill, so a self-propelling mower is needed to make sure we can maintain them properly.

“When the old lawnmower broke down, we were a bit stuck, so we are very grateful to Carolyn and to Aish for their help in spreading the word, and for the donation from Selwood.”

Devon Dog Behaviour Rehab and Rehome has an active community on Facebook and its website can be found at www.rehabrehome.co.uk