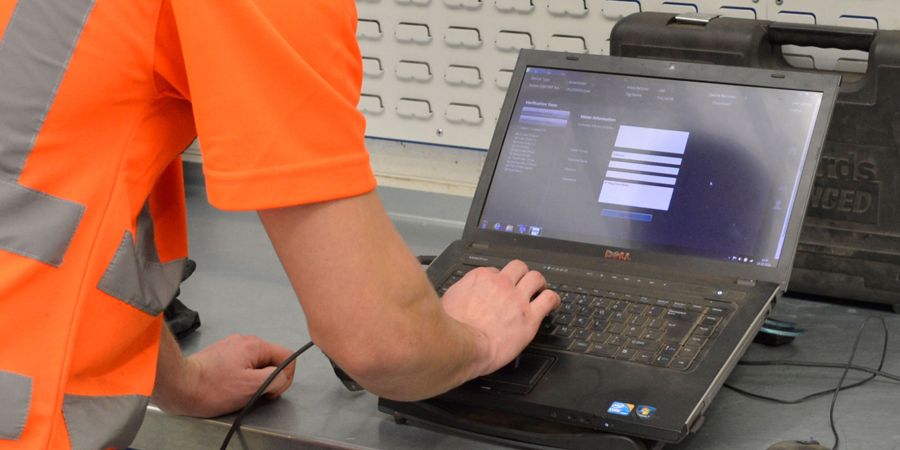 Now customers can be more confident than ever after Selwood specialists worked with a key supplier to help in develop of a new tool which enables us to quickly and easily verify the accuracy of flowmeters used in our packaged pumping systems.

All Selwood’s packaged solutions, which are rented to customers across a wide range of industries, are carefully tested between hires. These tests include the verification of each flowmeter to ensure that it is within its original calibrated specification, so the customer can have confidence that flows are being accurately measured.

Selwood uses ABB’s WaterMaster flowmeters and was originally using ABB’s VeriMaster verification system, which consists of a software package that tests key parameters such as resistance and voltage to check flowmeter sensor and transmitter calibration. The VeriMaster system uses an infra-red scanner which is attached to the flowmeter transmitter and connected to a PC via a USB cable.

“We had used the VeriMaster system for a while and found that it worked well while the transmitters were still new,” explains Carl Whitfield, Electrical Asset & Support Manager for Selwood. “However, wear and tear incurred as a result of our customer’s applications meant that we started having issues keeping the infrared scanner connected to the transmitter, which led to verification tests taking hours rather than minutes.”

Searching for a solution to the scanner problem, Selwood contacted ABB through its supplier, WH Good Automation Ltd, one of ABB’s network of Instrumentation Alliance Partners. By coincidence, ABB had completed work on its new ABB Ability™ digital cloud-based verification tool and was looking for companies to help evaluate it.

In contrast to the VeriMaster-based verification tool, the new ABB Ability™ digital platform offers both an infrared scanner and a HART (Highway Addressable Remote Transducer) connection, providing a fast and robust connection for the transfer of data between the flowmeter and the software.

Selwood conducted beta testing of the new software for three months, making suggestions for enhanced features that would make testing even easier. The input and recommendations of Selwood’s pump solutions team at Selwood influenced the design of the verification package and its software.

“The new tool is much quicker and easier to connect,” says Carl. “Unlike other companies that verify their flowmeters only occasionally, we have a high turnover of testing of our meters and can test up to 50 a month. The new verification method connects instantly, drastically cutting the time we need to spend.”

“The software was not far from commercial release, so getting Selwood to test it was very valuable. In using it to help solve Selwood’s verification issues, we gained valuable feedback and additional ideas that helped us to further refine the tool in ways that could help broaden its functionality for other users as well.

“Carl gave us some very positive feedback and explained that it was very easy to connect to the software. We already thought the tool was good, but this was the confirmation we needed.”