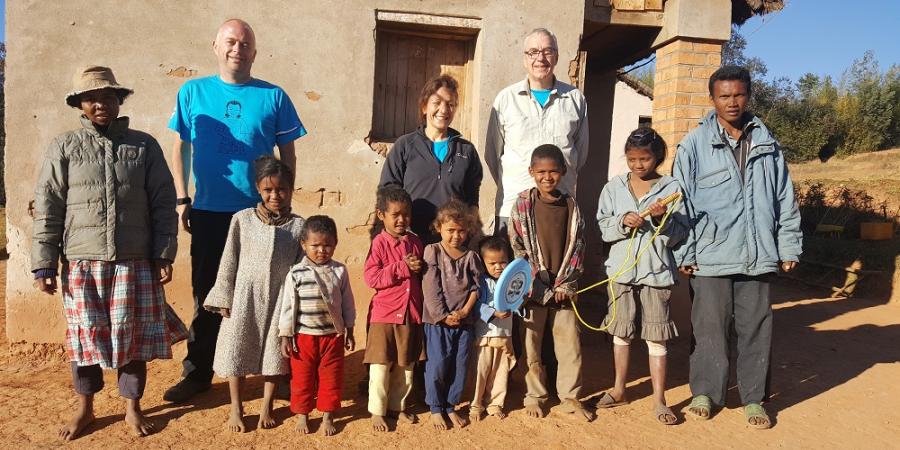 Every day we wash, brush our teeth, use the toilet and drink clean water without giving a second thought to how lucky we are.

But for millions of people around the world, access to water suitable for drinking and sanitation is a basic human right that they are denied – with potentially deadly consequences.

Richard Brown, a director at Chandler’s Ford-based pump rental company Selwood, has seen first-hand how communities can be blighted by poor sanitation – and how they can be transformed with a little help.

He has just returned from a 5,000-mile mission to Madagascar, one of the poorest countries in the world, as part of a campaign headed by Wessex Water and its partners in support of WaterAid.

There, Richard and his fellow team members helped dig canals, carry water and sand and build sanitation facilities, and also met many of the local villagers that the projects are helping.

This was Richard’s second visit to a WaterAid project area – in 2012 he was emotionally affected by the severe devastation he witnessed in Burkina Faso, caused by appalling sanitation there.

“Nothing prepares you for seeing it first hand,” he says. “To visit somewhere where there is abject poverty, no water or sanitation is difficult and incredibly humbling – it’s emotionally draining.

“You see and hear of children who are ill and of people walking a long, long way to get water that isn’t very clean anyway. You see people collecting water from a stream and then minutes later, cows are standing there drinking and peeing in the same place. This is the best source of water these people have.

“In the peak of the dry seasons it can take villagers a few days of searching to find a spot that yields even a tiny trickle of muddy water.

“I’ve seen babies that were forced to drink from a river bed that was almost dry. The water that could be recovered had to be dug for – it was dirty and contaminated.

“Most of us have children or grandchildren. To see that really hit home and made me think how lucky we are. That’s one of the reasons why, following the visit to Burkina Faso, I was determined to try to help make a difference in Madagascar.”

WaterAid, a non-governmental organisation focused on improving access to safe water, sanitation and improved hygiene worldwide, has been working in Madagascar since 1999.

Richard’s trip was part of a £100,000 project focused on the Faratshiho district, one of the worst affected areas, where WaterAid is helping to install gravity fed systems to give villagers access to clean water for the first time.

Some of the work Richard helped with involved the hand digging of trenches, with sand removed from the river bed transported by ox and cart.

Although conditions there were not as bad as they were in Burkina Faso, the experience was still an emotional one.

“Madagascar hasn’t got a water shortage like the drought-hit areas of Africa,” says Richard. “There is access to water but it isn’t clean and isn’t suitable for drinking and sanitation. Often it’s riddled with pollution and bacteria.

“One of my most poignant memories of this trip is of when we visited Marohanina village, a community where work was already under way to install a gravity fed system.

“We received an overwhelming welcome from the villagers – the joy of knowing that they would soon have a supply is really indescribable. They knew it would hugely improve their health and ultimately save lives – particularly the lives of children.

“It would also save them walking long distances to collect dirty water, which in turn leaves them able to concentrate on being able to work and build a local economy.

“When you bring clean water into a community, you open up so many other possibilities. For example, in rural communities, women and girls often spend their entire day walking to collect water, meaning that they don’t have time to go to school or earn a livelihood.

“If you free up that time, you open so many doors for them in terms of education and employment. It’s literally life-changing.”

According to WaterAid, diarrhoea caused by water-borne bacteria is the second biggest killer of children in Madagascar. Globally, 315,000 children under five die from diarrhoeal diseases caused by dirty water – that amounts to almost 900 children a day.

As well as providing water systems, WaterAid’s work is around education – teaching villagers the importance of good hygiene behaviour, which can often mean reversing long-term habits and breaking some cultural taboos.

“It’s wonderful to see,” Richard adds. “You see them being taught about sanitation, making up songs with the kids about the importance of hand washing and cleanliness.

“Selwood has been a long term supporter of Water Aid and raised thousands of pounds over the years through events like the Three Peaks Challenge, but projects like this are real eye-openers – there is no substitute for seeing with your own eyes what a difference it can make.

Richard has launched his own fundraising appeal in support of Water Aid and hopes to raise £2,500 from supporters.