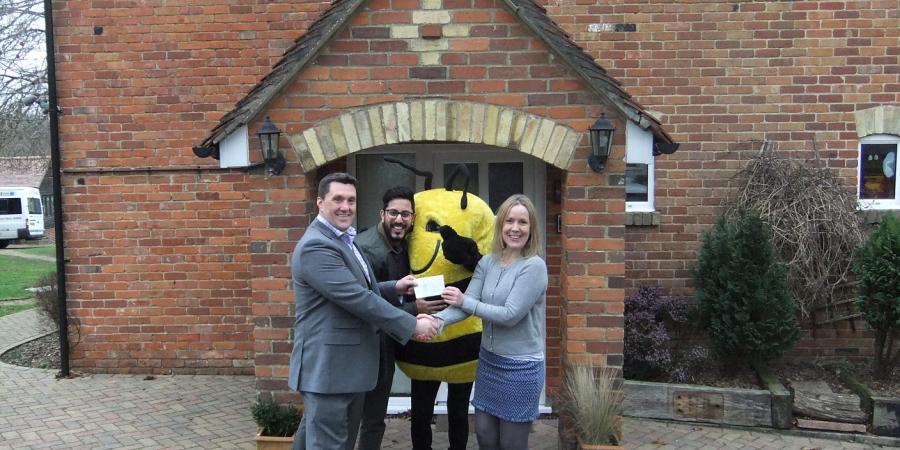 Staff at Selwood helped raise hundreds of pounds to support young carers and vulnerable children by running a raffle to win a games console.

Nigel Apps, Selwood’s Chief Financial Officer, chose the Honeypot Children’s Charity, based in The New Forest, to benefit from the draw, with an Xbox One S as the prize for one lucky winner.

The charity offers respite breaks and support to young carers and vulnerable children between the ages of five and 12, offering them a break from the stresses of home.

Tickets sold were put into a draw, with the winning entry picked just before the Christmas break. The company’s board of directors matched the total raised from ticket sales.

Nigel and Selwood’s Marketing Manager, Depesh Dayal, visited the charity to hand over a cheque for £1,460 to Laura Coleman, the charity’s Regional Fundraising Manager, and its mascot Bumble the bee.

The money is enough for the charity to support three children for a year.

While they were there, Nigel and Depesh were given a tour of the centre to learn more about the charity and its work.

Nigel said: “The team at Honeypot Children’s Charity do an incredible job in providing support for children who really need it. We are pleased to be able to support the charity and to learn more about the valuable work they do.”

Laura Coleman, Regional Fundraising Manager for the Honeypot Children’s Charity, said: “We are absolutely thrilled that Selwood chose to support the charity and in such a creative way.

“Their efforts will fund a respite break at Honeypot House for three local children, plus outreach support and a Christmas present each.

“Honeypot receives no direct government funding and we are totally reliant on donations to continue our much-needed work so on behalf of the charity. I extend my warmest thanks and gratitude!”